When Should the Church Send Out An SOS? 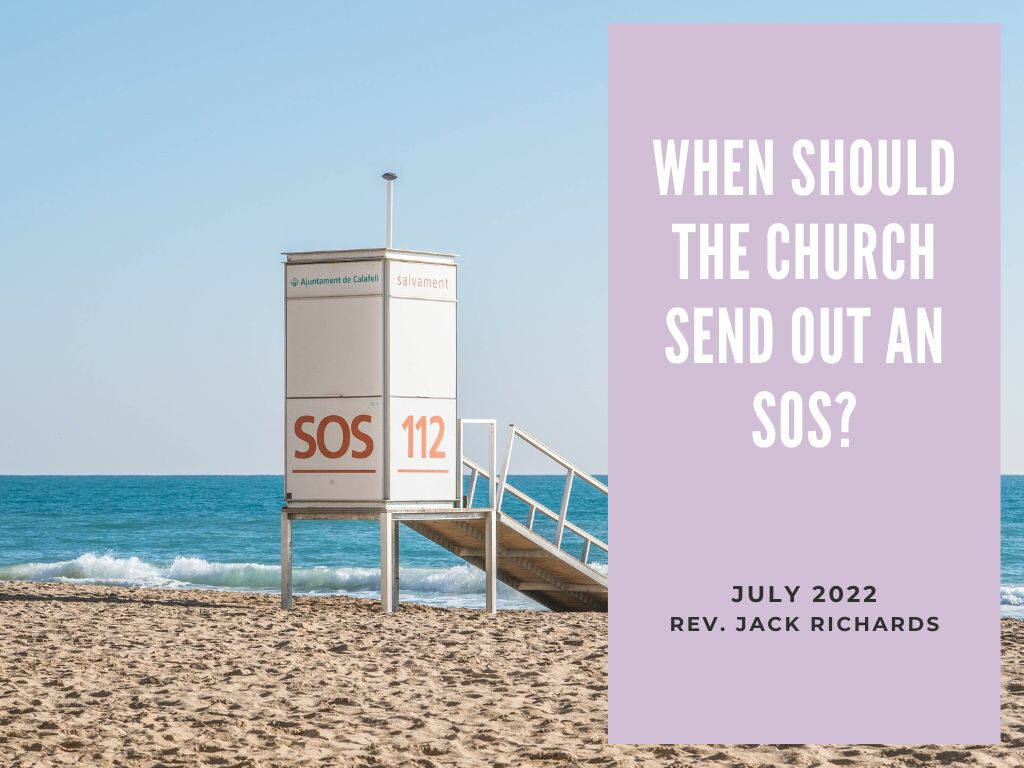 Is there ever a time when everybody in the church should stop doing what they are doing in order to gather together for prayer?

SOS is a visual distress signal that developed from the Morse Code. When the operator sends out 3 dots, followed by 3 dashes, followed by 3 dots, he spells the letters SOS. It indicates that help is needed quickly. People in need who have been stranded, perhaps on an island, have spelled SOS on the sand, so that it will be seen from above. SOS attracts attention and is a plea for help. It is quick, clear and concise.

The first SOS signal was sent out in 1909. However, in 1912, perhaps the Titanic should have used it first in order to save lives. Instead, the operator aboard the “unsinkable ship,” sent out the Marconi Company distress call, CQD. After there had been no response, another operator suggested sending out SOS, since this signal had been adopted as the international call for help.

Is there ever a time when Christian believers should drop everything to gather to pray? When should the church send out a SOS to pray? In the book of Joel, we gain insight to these questions. Prophet Joel told the Jews in the southern kingdom to call for a Solemn Assembly. The country had just experienced a locust plague that had literally destroyed the crops. Now the people were facing famine. God’s people were experiencing a catastrophic event that had caused severe desperation. What should be done to rectify the situation? Joel said God’s people should come together to seek God’s intervention. They should cry out to God, fast, and repent. Everyone should participate. No one was excluded. This required everyone humbling themselves, whether they were elderly, adults, children, infants, newly married, ministers, or church leaders. Everyone should weep in repentance before God.

The question is WHY? The Jewish people had not been sincere in their worship. They were going through the motions. God wanted them to examine their hearts. No one was exempt. Renewal and restoration was desperately needed by all.

WHEN SHOULD THE CHURCH SEND OUT AN SOS? Is there ever a time when everyone in the church should stop doing what they are doing in order to gather together for prayer? In the 21st century, there is a great need for churches to call for a Solemn Assembly. Joel 1 and 2, teach us that a Solemn Assembly should be called when there is a national crisis. The Jewish people had been overcome with locusts. During 2020 and 2021, the world experienced the COVID 19 pandemic. It was just not national in scope, but international. When there is a crisis in the country, city, or community, there is a need to send out an SOS to gather to pray. If there is any form of unrest in a city, a time of prayer should be called for everyone…not just the 25%, or even the 75% of the people that are facing the calamity. Everyone in the country, or city, or community, who are in the middle of the severe problem should be called. The National Day of Prayer, which is held on the first Thursday of May, is a call to pray for our nation’s President, political leaders, Supreme Court Justices, and other judges, along with the military, educational leaders, governors, mayors etc. Every Christian should be involved.

There is a second reason to call for a Solemn Assembly. The Jewish people had moved away from God and they needed to get back with God. Godly morality was at an all-time low. Time was needed for repentance, refining and recommitment. In present times, it is so easy for the church to get too close to the culture. When the culture is influencing the church, rather than the church influencing the culture, this is an SOS moment. People are not getting saved. There are no water baptisms. Believers need to gather together to pray for revival and spiritual awakening. A Solemn Assembly sends out a distress signal to God telling Him that His people are desperate for renewal and refreshing. In Acts 2, on the Day of Pentecost, Peter quoted from Joel 2 indicating that the Holy Spirit had come to baptize believers to live out the Christ life in an ungodly world. The Upper Room was a form of a Solemn Assembly that turned into the coming of the Holy Spirit empowering all believers. Such empowerment is regularly needed. Time needs to be taken by believers to wait in God’s presence. This truth is declared in 2 Chronicles 7:14.

Still today, the Church needs to have designated times of revival, renewal, recommitment and refreshing. The Day of Pentecost should be celebrated the way Christmas and Easter are celebrated. Believers need the mind of Christ, not the thoughts, values and emotions of society. They need to be challenged to grow in their faith. 1 Corinthians 3:1ff

Is it time for a Solemn Assembly to be called? When there is a national invasion of locusts that plague your nation, or when there is a spiritual drought within the Church that results from a spiritual famine, then God’s people need to gather together to pray. The trumpet call needs to be blown when there is nation-wide catastrophic events and great moral decline. Whether you are elderly, or newly married, everyone needs to come together to fast, repent and weep before God, asking Him to once again send the mighty rushing winds and the fire of the Holy Spirit, which will sanctify believers and bring unsaved people to decide to follow Jesus Christ.

Will you pray as the Psalmist did? “Will You not revive us again, that Your people may rejoice in You? Show us Your unfailing love Lord and grant us Your salvation.” Psalm 85:6,7

Heavenly Father, I would ask that You begin a revival in my time. May it spread and become a spiritual awakening in the community, city and country. May Your people become serious about earnestly seeking You for revival and renewal. Begin this prayer in me. AMEN!